Offering an intimate look at one of the world’s most revered human rights figures from his childhood to his election as South Africa’s first black president, the feature-length film produced by Jonathan Demme was nominated for the 1997 Academy Award for Best Documentary. A 26-track CD soundtrack includes South African legends Hugh Masekela, Johnny Clegg & Saluki, Vusi Mahlasela, The Manhattan Brothers, Brenda Fassie and many more. The 48-page book and National Geographic Map chronicle the political and cultural history of South Africa.

48-page Book
Telling the compelling story of the extraordinary life of Nelson Mandela is a beautiful, 48-page book filled with dozens of photos and art images, and an essay by acclaimed British journalist Robin Denselow.

About Palm World Voices
Exploring contemporary music and culture from musically rich areas of the globe, each release in the Palm World Voices series features a 60 minute DVD of music and beautiful contextual footage, a full-length CD, an essay booklet filled with history and information on each region, and an exclusively-designed 20” x 30” poster map created by The National Geographic Society to enhance the visual knowledge of the region.
Palm World Voices: Mandela

DVD: Mandela: Son of Africa, Father of a Nation

A Captivating view of the indomitable spirit if one of the world’s most fascinating figures, this full-length documentary follows Nelson Mandela from his early days and tribal education to his election as South Africa’s first black president. Providing insights into his early life, the film takes us through Mandela’s childhood, adolescence, career in law and first marriage. Mandela is an absorbing look at the courageous life, tribulations and fortitude of Mandela the leader, while never forgetting the engaging and charismatic spirit of Mandela the man. Film features exclusive interviews and narration from Mandela himself.

Side by side : The autobiography of Helen Joseph

Peacemaking and Peacekeeping for the New Century : [Bibliography]

To End A War : [Bibliography]

The Human Rights of Street and Working Children: A Practical Manual for Advocates : [Bibliography]

For Humanity: Reflections of a War Crimes Investigator : [Bibliography]

Deliver Us From Evil: Warlords & Peacekeepers in a world of endless conflict : [Bibliography]

Unequal Protection: The Rise of Corporate Dominance and the Theft of Human Rights : [Bibliography]

The Missing Peace: The Inside Story of the Fight for Middle East Peace : [Bibliography]

Looking Back, Reaching Forward: Reflection on the Truth and Reconciliation Commission of South Africa : [Bibliography]

A Human Being Died That Night : [Bibliography]

Country of My Skull: Guilt, Sorrow and the Limits of Forgiveness in the New South Africa : [Bibliography]

Speak Truth to Power : Human Rights Defenders Who Are Changing Our World : [Bibliography]

Statement by Nelson Mandela at the United Nations General Assembly

Inauguration of the Nelson Mandela Award for Health and Human Rights

Message from ANC President, Nelson Rolihlahla Mandela, to Arthur Krim on the occasion of The People for the American Way Ward Ceremony

Arthur Krim's receiving The People for the American Way Award

Centenary celebration of the Fre Ethiopian Church of Southern Africa

Address by Nelson Mandela at the Fourteenth International Conference of the International Society for the Reform of Criminal Law, 3 December 2000

International Society for the Reform of Criminal Law conference on Human Rights and the Administration of Criminal Justice, Sandton, Johannesburg, 3 - 7 December 2000

Address of Nelson Mandela at Investiture as Doctor of Laws, Soochow University, Taiwan

Investiture as Doctor of Laws

Speech of the ANC President, Nelson Mandela, at the Award Ceremony of the Apostolic Faith Mission

Acceptance speech of the President of the African National Congress, Nelson Mandela, at the Nobel Peace Prize Award Ceremony

49th Session of the General Assembly of the UN

National Day of Safety and Security

10th anniversary celebration of the Noluthando School for the Deaf

Unveiling of the Human Rights Monument

50th anniversary of the World Council of Churches ; The ANC website has the date as 12 Dec 1998 and the South African Government Information Website has it as 13 Dec 1998. It is not known which is correct.

Address by President Mandela on accepting the Deutscher Medienpreis

On accepting the Deutscher Medienpreis

Special Debate on the TRC Report

Joint sitting of Parliament to mark 10 years of democracy

Remarks by Mr Nelson Mandela at the Amnesty International, Ambassador of Conscience Award

Receiving the Ambassador of Conscience Award from Amnesty International

Speech by Mr N R Mandela at the 46664 Tromso Concert 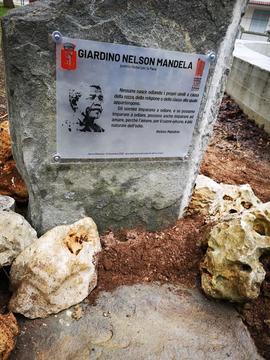 Comune di Campi Bisenzio has dedicated a garden to Nelson Mandela. The dedication was part of the celebrations of the 70th anniversary of the Universal Declaration of Human rights. The Comune of Campi Bisenzio is a Town of roughly 47000 people and is part of the Metropolitan area of Florence.

Verne Harris and Mr Sello Hatang attending the Human Rights conference in Maldonado, Uruguay on the topic "Coming to Terms with the Past".

It's your rights: The right to housing

Price of gold: An exhibition of photographs by Thom Pierce

Human Rights Commission is a big collection that has material on Nelson and Winnie Mandela statements, correspondence, prifiles, press cuttings, statements and publications.