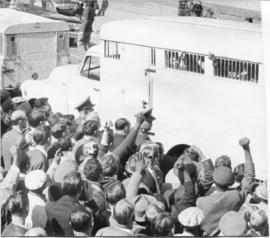 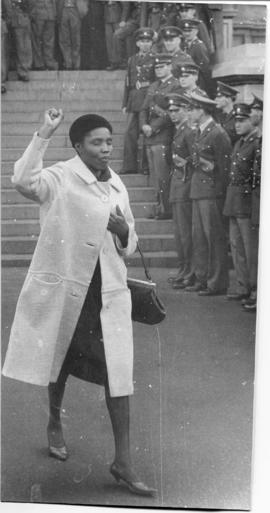 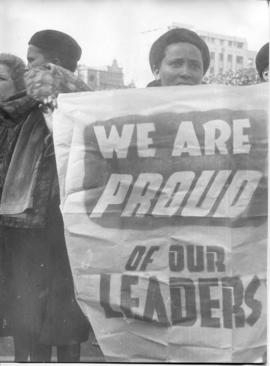 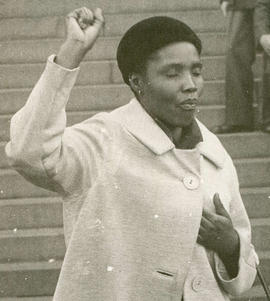 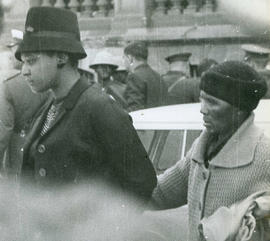 Mr Shapiro emailed the photos to the Nelson Mandela Foundation in December 2013, days after the passing of Nelson Mandela. The NMF subsequently borrowed his prints and scanned them in tiff format.

Donated by Lionel Shapiro to the Nelson Mandela Foundation

The photos are taken on 12 June 1964, the day of the verdict in the Rivonia Trial. Lionel Shapiro took the photos whilst studying at Wits and taking pictures once a week for the student paper. Nelson Mandela leaving court in a prison van, protestors, Winnie Mandela and Mandela's mother.

The collection consists of 4 photographs - LS001: Winnie Mandela and Mandela's mother, Nosekeni leaving court; LS002: June Mlangeni leaving the court; LS003: The trialists leaving court after the sentencing in a prison van. Mandela is the first person on the left in the van; and LS004: A supporter outside the court with placard "We are proud of our leaders".

Access by permission of the Nelson Mandela Foundation.
Some materials may contain personal or confidential information. Access to these materials may be restricted as stipulated by legislation, Archives policy, or the donor. Please consult the archivist for details

Copyrighted and full conditions governing reproduction allocated to the NMF. The NMF can decide on Mr Shapiro's behalf usage by third parties. External reproduction with express permission of the copyright holder. ©Lionel Shapiro. Upon written approval, collection item(s) can only be used once for the purpose stated in request. Collection item(s) should not be shared with third parties nor commercially or personally archived. Copyright and source credits must be cited when exhibiting/publishing and additionally embedded for online use.

NMF Archive: tiff files of the scanned photos are also on CD# 0228