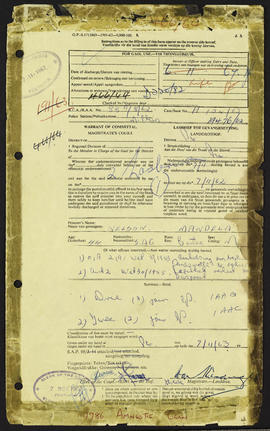 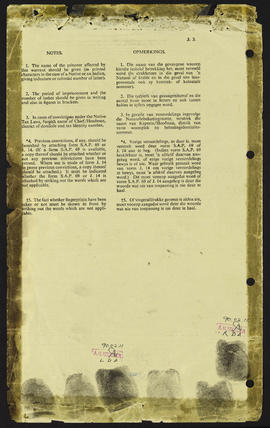 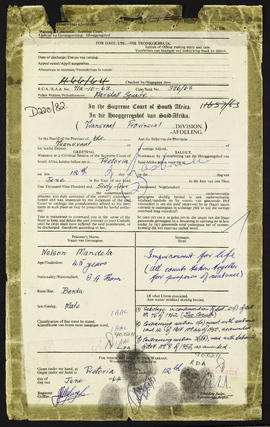 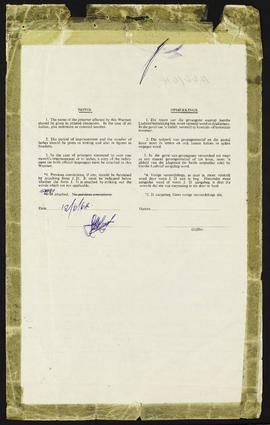 These items were framed and given to Nelson Mandela on 1995-2-11 by Minister Sipho E. Mzimela on behalf of the department of Correctional Services at Robben Island. They originally formed part of the ANC Gifts Collection.

Following Nelson Mandela’s sentencing on 7 November 1962, the Pretoria Magistrates Court issued a warrant committing him to prison for five years.
He had been convicted and sentenced that day to three years for on charges of “inciting to trespass laws” (to strike) and two for leaving South Africa without a passport. It was stipulated that the two sentences were to run consecutively.
The second Warrant of Committal was issued by the Transvaal Provincial Division of the Supreme Court of South Africa on June 12, 1964, the same day the judge handed down a sentence of life imprisonment for Mr Mandela and his colleagues, who was convicted on four counts of sabotage in the Rivonia Trial.
The first two counts were for contravening Section 21(1) of the General Laws Amendment Act (Sabotage Act) No. 76 of 1962; the third in contravention of Section 11(a), read with Sections 1 and 12 of Act No. 44 of 1950; and the fourth was for contravening Section 3(1) (6), read with Section 2 of Act No. 8 of 1953 (as amended).

They have both been digitised